An Excelent Rating for Floris! 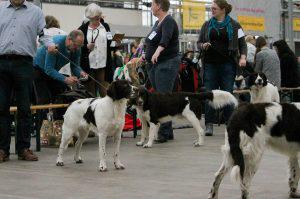 It was on the calendar for a while and now finally the moment came! Last Saturday March 18 Floris did his first dog show.

Of course Floris has to know what is expected from him at a dog show. First of all he has to learn to “stand”. That’s not so hard you could think. Well, I can tell you that Floris learned to sit very well. So he’s a very good doggy. But to “sit” in the showring is not done. So we practiced! Fortunately Floris learns quickly as he is very food minded. A cookie makes miracles so he learned to stand reasonably fast. 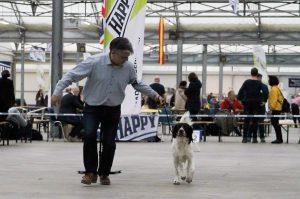 And there is to walk nicely in the ring; that can be hard too for a young and darting clown.In the ring we wlak on a leash. Neatly at the masters left and without the leash in the mouth as Floris likes to do. Jumping is not done and out of the question. So we practiced moving through the ring a lot as well. That was not always easy because of blowing leaves or a heron in a ditch which sometimes led to distraction. 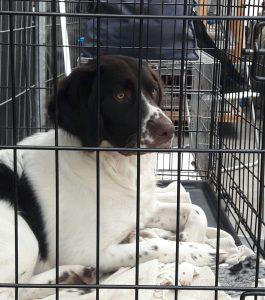 Then the great day has arrived. Together with the master to Hazerswoude for the first show. For Eve this created some confusion; The bench was put in the car, the Show-bag was taken out and still she had to stay home. Since the Frisian Stabijs were judged first, Floris could quietly settle in his bench to process his surroundings and all the new impressions. He thereby had the support of his father Floris sr., and other masters Joost and Anna. The first show is quite a bit of a milestone so they may not be missed. 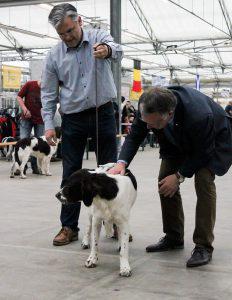 After an hour the time came! The junior class males were expected in the ring. Floris and three other young males would be judged by Mr. W. Wellens. A very exciting moment. How would Floris do? Would he remember anything of what we practiced? Floris was the second to move through the ring and he did well! No jumping or other silliness. And even while standing in front of the judge he did not sit down! The assessment of the judge; how would the show reports content look like?

For those at home, the rest of the pack and I, it was perhaps more exciting because you can not “live” see what is happening. But fortunately I was informed by Anja and Anna. And then the redeeming word of the judge; Floris has earned second place with an excellent rating. For connoisseurs: He was 2E! With a very nice report. Amazing. So very proud of our clown! And that at his first show! Very nice to tell you is that his sister Jeppe also got a 2e rating. Not to forget Floris sr; He got an Excellent Rating in the Veteran Class. And as icing on the cake Floris sr. became Second in Best Veteran of the day of all breeds! A great achievement! 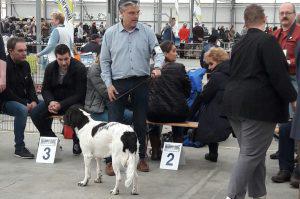 We noticed that Floris really likes showing. This is very promising for the future!

Enjoying the first rays of sunshine!

Floris has Game in his Nose

Floris has a Party

Floris has Game in his Nose

Enjoying the first rays of sunshine!

Floris is 25 blogs in our pack!

The pack is complete again

Floris sleeps over at other Masters

Floris, thé man of the pack

Floris is acting up again!