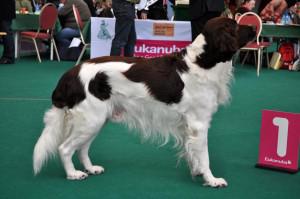 December 20, 2010 Max joined our pack. After living elsewhere for 8 years he had to be relocated. That did not take long. After meeting Floss it was clear that Max and Floss were friends. Max is a very stable dog.

He has a very gentle character for people, children and other pets . Max is an alpha dog, so when he runs into an other alpha the ranks have to be become clear first. 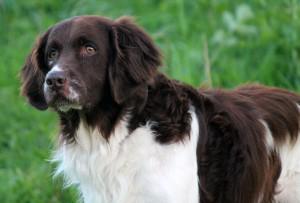 Since 2011 Max is on the ‘stud list’ at the Dutch Patridge Dog Association. Because we wanted to breed a nest with Max he had to get a VG (Very Good) at a dog show in 2011.
At his first show, the clubmatch he got 1E ( 1 Excellent) and beeted all existing champions. After this show Max showed up at many other shows. In his show career he got a VG only once.  At all other shows he always got an E In 2011 he earned two titles: Dutch Veteran Champion 2011 and Veteran Winner 2011. Check out  ‘showresult’ for all judging reports (in Dutch)
After a period of illness we had to let  Max go on September 30, 2014. We still miss him every day…
Email
error: Alert: Content is protected !!
Naast hondenkoekjes geven we ook digitale cookies om ervoor te zorgen dat onze website zo soepel mogelijk draait. Als je doorgaat met het gebruiken van de website, gaan we er vanuit dat je ermee instemt.OkMeer lezen