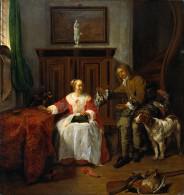 The origin of the Drentsche Partridge Dog goes far back in history. She is one of the oldest Dutch breeds. She descends from the Spioenen which came along to the Netherlands  with the Spaniards in the 16th century. You see them regularly on old paintings, as shown in “The gift of the hunter ‘by Gabriel Metsu. Several breeds originated from the Spioenen.

In eastern Netherlands, and especially in Drenthe, the Drentsche Partridge Dog was always bred very pure. This is not very surprising when you consider that Drenthe was quite isolated and the people did not have the money to travel far until the 20th century. The Drent was bred because they had the need for a hunting dog that matched the Drentsche rugged moorland. So not a fast ans spacious hunting dog in a rough area, but a dog that works precisely, hunt under the gun, can point and retrieve. Also the Drent had to guard the yard but had to be a loving family dog too.

Eext in Drenthe is considered to be the cradle of the Drentsche Partridge Dog. Here Drents were bred by different people named Schuiling. Among hunters a Schuiling-dog (Schoelinghond in dialect) was a class of it’s own.
All Drens therefore have Schoeling- blood in their ancestral lines. The oldest strain called the Schuiling strain is also called Nimrod strain after the progenitor Nimrod. He was born in June 1940.

The Drentsche Partridge Dog was officially recognized on May 15, 1943 after a scrutineering day which was held  On April 18, 1943 in the Groningen Concert Hall. During these inspections on hunting properties and type it did show how well the dogs were from the Schuiling strain. Nimrod became first and proved to be bred so pure that he was asked for many matings. Nimrod bred with some good bitches from the environment and their offspring were intercrossed making the Nimrod (or Schuiling) strain emerged. Dogs from this strain were used by all breeders. This allowed the “Nimrod Type” spread throughout the entire race.